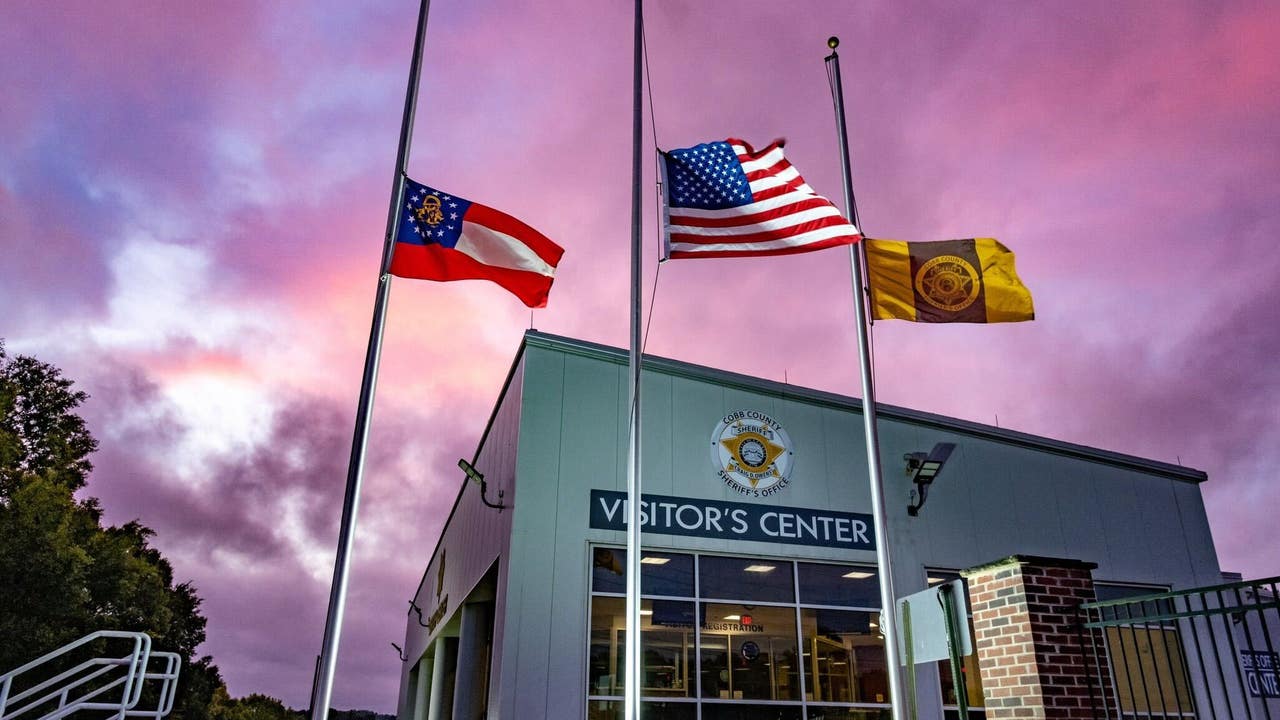 Several law enforcement officers joined a very long procession escorting the bodies of the two Cobb County deputies who were shot while carrying out a warrant at the hospital.

Officials say the two deputies, whose identities have not been released, were trying to serve a warrant at a house on the corner of Hampton Glen Court and Fenwick Drive, just west of Marietta.

According to Cobb County Sheriff Craig Owens, the deputies were getting back into their car when another vehicle pulled up and started shooting.

“My two deputies were ambushed and killed,” Owens said.

After a confrontation of several hours, two people were taken into custody. Their names have not been disclosed.

The deputies are the first two law enforcement officers killed in Georgia this year by gunfire and the first deaths in the line of duty since Owens took office 18 months ago.

Law enforcement officers from multiple agencies escorted the bodies of two Cobb County deputies who were killed in the line of duty while serving warrants at a Marietta-area home.

The loss was felt across the community with dozens of law enforcement officers escorting the bodies of the two MPs from the scene to Wellstar Kennestone Hospital and then to the medical examiner’s office.

“Our hearts are definitely broken here in Cobb County,” Owens said. “It’s going to take some prayers to get us back to where we need to be.”

Although the sheriff did not release the deputies’ names, he called them “two brilliant young deputies” who have served the county for more than five years with “dignity and honor.”

“It’s a sad night tonight for the citizens of Cobb County and for the Cobb County Sheriff’s Office and law enforcement back home,” the sheriff said. “More so, it’s a night of heartbreak for two families from the Cobb Sheriff’s Office, two wives who lost their incredible husbands.

Investigators scour the area where two Cobb County deputies were killed in an “ambush” while trying to issue a warrant on Sept. 8, 2022. (FOX 5)

Law enforcement across the state responded to the fatal shooting.

The Georgia Bureau of Investigation tweeted its condolences to the sheriff and the sheriff’s office.

“Our thoughts, hearts and prayers are with you,” the Atlanta Police Department wrote on Twitter.

“I think when an agency loses someone, we all lose someone. And I think every sheriff and every chief can attest that when this tragedy hurts our community, it hurts their community as well,” Owens said.

The sheriff said he also received a call from Governor Brian Kemp asking if he could provide resources or help.

In a tweet Friday morning, the governor said he and his family were “deeply saddened to learn of the murder of these two deputies.”

“Men and women like them bravely serve our communities every day, and we owe them great gratitude,” Kemp wrote.

He said the only thing his agency needs right now is prayers.