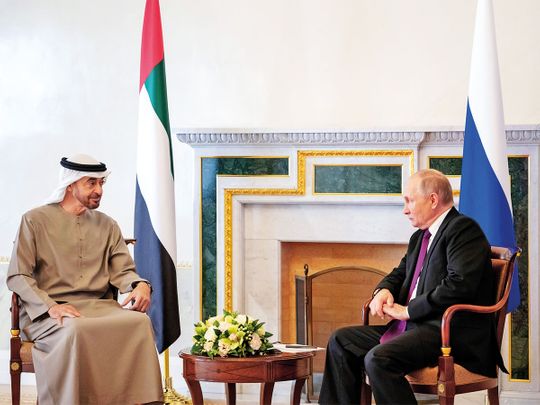 Russian-Ukrainian conflict and the importance of international law

The UAE has made diplomatic efforts to resolve international issues at the regional and international levels, thanks to the wise policies and guidance of President His Highness Sheikh Mohamed bin Zayed Al Nahyan.

To solve one of the most pressing problems of our times, several bodies like the United Nations, with the exception of major Western countries and some Asian countries, are trying to resolve the current conflict through diplomatic means and are considering the prospect of a better future for both of the countries.

The problem posed by the Russian-Ukrainian war for the world is not lost on many. It has had a significant impact on the mobility of people and goods in Europe. Apart from issues such as fuel supply and rising fuel prices, the economic cost caused by the conflict has been severe.

One of the most alarming supply chain issues resulting from the Russian-Ukrainian war is food shortages, particularly acute in low-income countries. With the onset of winter and the shortage of gas supplies to Europe, the situation does not look good.

In this particular conflict, there have been several instances of alleged atrocities, claims and counter-claims by all parties demanding the implementation of international humanitarian law as soon as possible in order to avoid further casualties.

It also involves developing a scenario in which the world’s major political blocs participate and call on both sides to adhere to international law.

But the problem is this: how to effectively solve the Russian-Ukrainian problem in the shadow of international humanitarian law?

What the world must emphasize is the inevitability of seeking peaceful solutions to border disputes; given its importance and seriousness. This makes the peaceful resolution of the ongoing crisis an urgent necessity that States must pursue in their mutual relations in favor of international peace and security in a spirit of good neighbourliness.

According to international law, the parties to an international conflict must seek its settlement by peaceful means, in accordance with the principles of peaceful coexistence.

Negotiations are an effective means of preventing the emergence of conflicts between States. Although consultations are not mentioned in the Charter of the United Nations, they are mentioned in an increasing number of international treaties as a means of settling disputes arising from the interpretation or application of the respective treaty.

In other cases, the parties involved resort to consultations, when one party expects that any decision or action it might take could harm the other country, in order to avoid the occurrence of any conflict. .

The importance attached by international law is so clear and this principle is primarily responsible for maintaining international peace and security.

The importance of establishing a forward-looking scenario for the peaceful resolution of the problem between Russia and Ukraine in order to spread peace between the two states cannot be underestimated.

Peace can only be established through mediation and negotiation, through diplomatic means. The presence of the great powers, both Western and Eastern, should help find an appropriate form of dialogue that satisfies the parties.

It should be mentioned that the UAE is committed to international law by respecting the United Nations Charter and international laws. The country establishes relations with all states of the world on the basis of mutual respect and non-interference in the internal affairs of others.

This is in addition to the attempt to resolve international disputes through dialogue and peaceful means, and effectively contributes to the consolidation of international peace and stability.

As the ongoing conflict between Russia and Ukraine demonstrates, the importance of international law becomes all the more important and indispensable in finding the solutions necessary to maintain international peace and security.

Dr. Ahmed Mohammed AlMheiri is an expert in international law