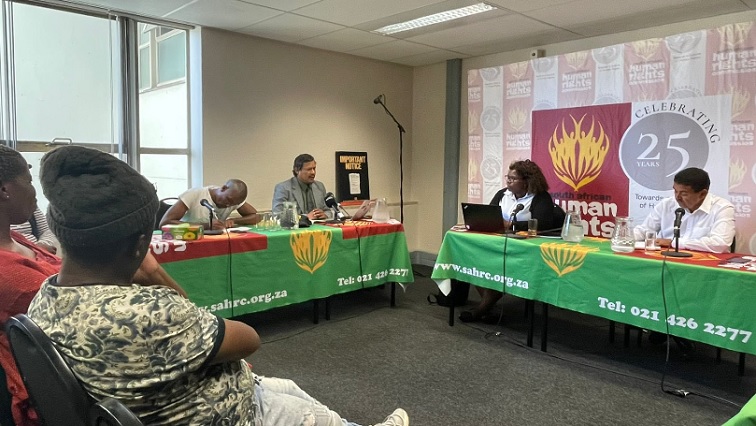 The South African Human Rights Commission (SAHRC) has launched its second round of hearings into allegations of law enforcement brutality during land evictions in the Western Cape.

Commissioner Chris Nissen said he had received several complaints in the South Cape and Cape Town over allegations of excessive use of force by law enforcement during removals and the demolition of shacks.

The first hearings took place in Knysna earlier this year.

The SAHRC says the land invaders complain of assault, being roughed up and insulted by law enforcement officers during evictions. They say their furniture breaks.

The complaints came from the communities of Khayelitsha, Mamre, Atlantis and Mfuleni, among others.

The first witness, Taurique Jenkins of the C9 Coalitions, recounted the alleged assault session at Strandfontein refugee camp. The camp was opened by the city of Cape Town in response to COVID-19 to house the homeless.

Jenkins says the people at the camp were traumatized.

“When there were riots, they were actually greeted with law enforcement riot gear and they would come to the camp, and people were injured as a result. I would describe the camp as psychologically brutal, I would simply describe the mere presence of this level of machinery and the militarization has created a brutal psychological environment which in itself is excessive.

Nissen says community engagements led by community leaders would have been preferred during these alleged clashes. He says there are cases of legal evictions when a court order is presented, but says the aim is to find a lasting solution.

“We then convened these hearings to listen to all the parties, to say that we have received these complaints, and instead of listening to each complaint, we say let’s bring all the parties together in terms of allegations and presentations and they tell us their side of their story.

This week, the Commission will hear complaints from individuals and organizations. They will be tracked by government agencies including Ipid, Cape Town law enforcement and private security companies who are sometimes called upon to carry out evictions. A report will then be written with recommendations.