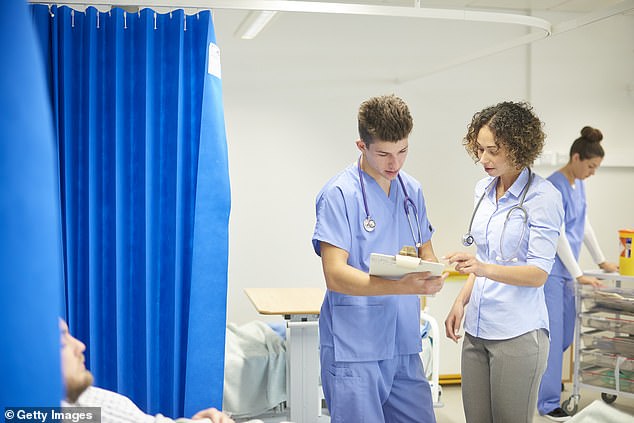 Trainee doctors and criminal lawyers are the latest organizations to pledge to strike this summer over wages and working conditions.

The two professions are in conflict with the government, and while junior doctors are threatening to strike, lawyers are already being voted out of action today.
It is part of a wave of planned strikes by railway workers, garbage collectors and postal workers in what is shaping up to be a “summer of discontent”.

According to the British Medical Association, junior doctors have approved a motion calling on the government to reinstate their ‘full pay restoration’, alleging their real earnings have fallen by 22% in 12 years and rising inflation is accelerating their losses.

A possible strike has already been authorized, with a target date of the beginning of next year “at least”.

Dr Sarah Hallett and Dr Mike Kemp, co-leaders of the BMA’s Young Doctors Committee, said: “No young doctor wants to feel like advocacy is their only option, but we are increasingly and faced with few choices.”

Meanwhile, a week-long vote on increasing the existing action, in which lawyers work their authorized hours and no more, is due to start today.

Due to a dispute with the Ministry of Justice over the rates for legal aid, it has already been in force for six weeks.

According to the Times, under the current system, young lawyers are sometimes paid less than minimum wage.

The government claims to have increased legal aid funding by £135m, but criminal lawyers have pointed out that this money is split between all barristers, including barristers, and is not going directly to them.

The Criminal Bar Association polls 2,500 of its members and says a 25% pay rise is needed to keep lawyers on the job.

“Over the next few days, every member of the criminal bar will have the opportunity to express their perspective on the path forward to ensure the future survival of our profession,” the Association said on Twitter.

‘All possibilities will be discussed. Any action requested by our members will be taken almost immediately.

After the coronavirus pandemic disrupted the court system, there is currently a backlog of up to 60,000 cases in the English and Welsh Crown Courts.

Cases had to be heard in two or even three courtrooms due to back-to-back closures and strict social distancing restrictions, significantly reducing the number of cases being heard at any given time.

According to the Ministry of Justice, the backlog has been reduced “thanks to our decisive action and the hard work of legal experts, in particular criminal lawyers, who will earn around £7,000 more a year from our reforms”.

The government has “made no promise that these long-awaited reforms will ever be enacted”, according to Jo Sidhu QC, president of the Criminal Bar Association.

Instead, he claims, the Justice Department is insisting that future changes be cost-neutral.

The government’s reluctance to take immediate action, according to Sidhu, “only increases the backlog of cases and heaps misery on complainants and victims of crime, whose trials are repeatedly postponed due to government intransigence.

The potential walkout comes as rail travelers brace for six days of chaos from June 21, when 50,000 members of the Rail, Maritime and Transport (RMT) union go on strike.

Although train operators will not issue a general ban, travelers will be advised to “only travel if absolutely necessary”.

↯↯↯Read more on the subject on TDPel Media ↯↯↯