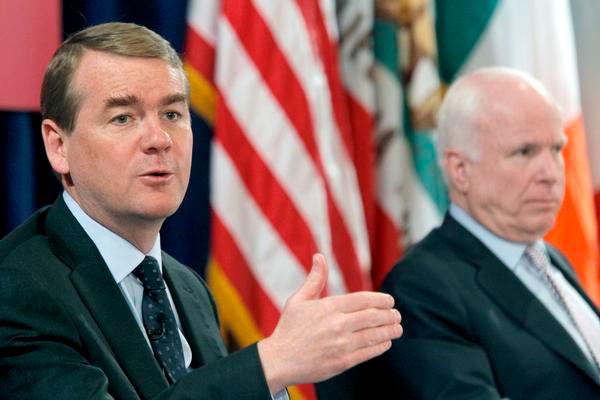 When it comes to crime, the authors blur the line between local and federal officials by blaming Bennet, a U.S. senator, for rising crime and the way crimes are prosecuted in Colorado courts, which are not controlled by Congress.

While the authors are rightly concerned about the fentanyl epidemic, they ignore Bennet’s strong track record. He fought to stem the tide of fentanyl and opioid abuse by toughening penalties on opioid manufacturers, improving access to treatment and providing more resources, including essential equipment, to law enforcement. And he got more money for the DOJ’s COPS program to put thousands more officers on our streets — a 30% increase this year alone. This is the role of a US senator.

On immigration, Bennet has been a leading voice in Congress, working tirelessly to modernize our system and bring border security into the 21st century. He was part of the bipartisan Gang of Eight, which drafted the last comprehensive immigration bill that not only offered a path to citizenship, but also $40 billion – a record amount of funding – for the border. . The bill passed the Senate but was defeated by Republicans in the House.

Today, Bennet continues to fight for immigration reform, in part by offering smart solutions at the border. Fentanyl is not transported across the border by migrants or traffickers. According to the Cato Institute, more than 90% of fentanyl is smuggled through ports of entry by US citizens. Bennet is pushing for improved technology and infrastructure upgrades at our ports of entry to improve drug detection capabilities, as well as additional tools to crack down on cartels. He got more resources and training for customs and border patrol, and he held them accountable when they broke the rules.

It is unfortunate that anyone politicizes the fentanyl crisis, which has affected so many Coloradans, including my own family. Unlike Joe O’Dea, Michael Bennett does not politicize this epidemic. He gets to work instead.

Does anyone remember the results of the vote of people who did not want development on this site? Because Denver’s planning department and developers are proceeding as if the vote hadn’t happened.

My guess is that their eagerness to expand was born out of greed and not the best use of the land, which is to maintain “conservation easement” in perpetuity.

Look around Denver; there are many empty apartment buildings and more are being built every day. The need for affordable housing can be met in many other unique ways. The zoning department can and has incorporated a requirement that a certain percentage of each development contain permanently affordable housing.

Large tracts of undeveloped land are a priceless commodity, and development of this site will cause unintended consequences that will cost Denver taxpayers for schools, libraries, medical facilities, police, and fire protection.

It is doubtful that the need for affordable housing will even exist in this area once development begins. Denver City Council, please pay attention to voters and leave the land undeveloped.

On October 19, the Denver Planning Board heard Westside Development’s rezoning application and proposed a small area plan for the Park Hill Golf Course. City staff’s repeated assertion that the conservation easement on the former golf course requires the land to be used only for a golf course and for no other purpose was troubling, both because it is false and because it made the whole discussion that followed insincere.

If the language of a deed or easement may be considered ambiguous (golf course v. open space), common law building rules make it clear that the grant clause prevails over any language of the document that might conflict, and if there is any ambiguity, the document should be construed against the grantor (here, Westside Development as successor to the Clayton Trust) and in favor of the grantee (here, Denver). There is simply no justification for City staff’s position that only one golf course is permitted on the grounds of Park Hill Golf Course.

The proposed I-25/Broadway Interchange at Lincoln St./Ohio Ave. is a holdover from Denver’s car-centric past. While other cities are removing infrastructure projects that have divided communities, this project is opening up previous wounds caused by forced infrastructure projects in this area. Conceived in 2007, the project was to align with the development goals of the Gates Rubber Plant to become a transit-oriented community that rivals Union Station. The objectives of the pedestrian and transit-oriented project were clear.

However, fifteen years later, the current designs of the project have missed each of its own project goals and ignore the original direction; improved access to RTD Broadway station, multimodal improvements, safety and cycling infrastructure.

I call on DOTI and all members of the city council to take action on this project. The design of the project does not reflect the citywide plans you have worked so diligently on for a safer and healthier Denver.

If installed as currently designed, the project will be a stain left on our city. The project area was once known as the “Gateway to the City”. Wouldn’t the best legacy be to repair the damage of previous decades by transforming this crossroads into a multimodal link intended to reconnect our neighborhoods? Let’s convert the area into the pedestrian precinct it was originally designed for.

To send a letter to the editor about this article, submit it online or see our guidelines for how to submit by email or mail.