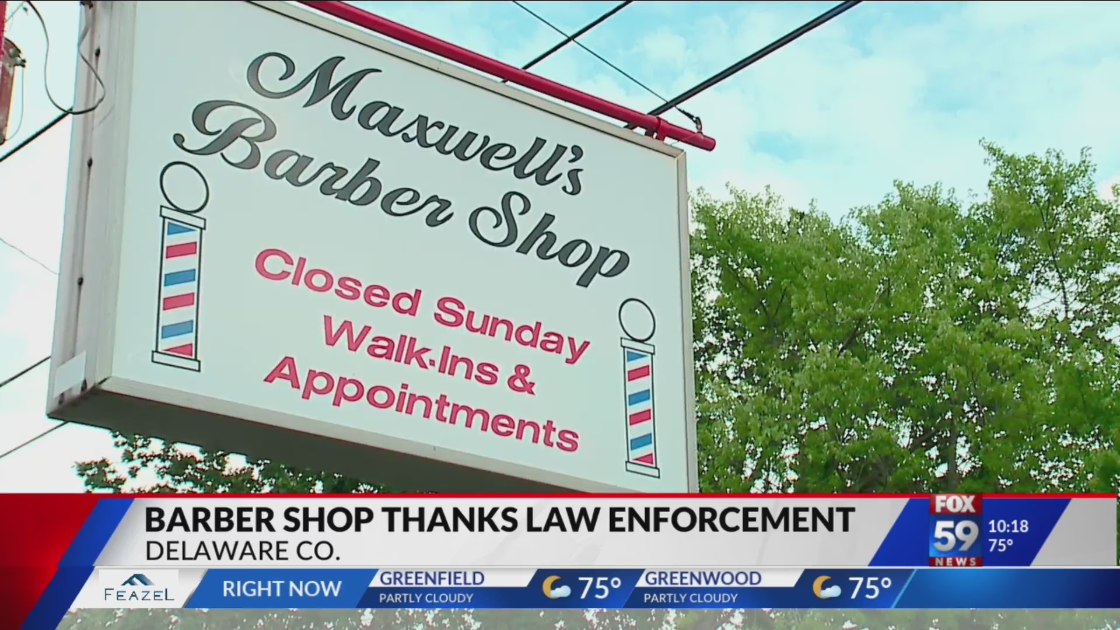 MUNCIE, Ind. – The team at Maxwell’s Barber Shop in Muncie is trying to say ‘thank you’ to members of law enforcement by offering them free haircuts through the end of August.

“Everyone is always talking about paying it forward. What better person to pay for it than someone who is going to lay down their own life for you,” said store owner Brian Richards.

In the wake of recent events, including the death in the line of duty of Elwood Police Department Officer Noah Shahnavaz, and more than half a dozen homicides in Delaware County in the month of July, including six at Muncie alone, Brian said he knew he wanted to do something to pay it forward.

“It’s a break with reality. They can come here and forget what they need to go back to,” Brian said.

He said he contacted Nick Richards, who also works at the store, to make sure he was okay with the idea.

“I texted Nick and said, ‘do you think we should do something like this? He’s always willing to help people. He’s been helping the local pantry through the winter and ever since. the school he graduated from,” Brian said. “So it was just a gut idea that did something.”

Until the end of the month, any member of law enforcement, including police officers, corrections officers and dispatchers, are encouraged to stop by for a free haircut. The only thing people need to bring with them is their credentials.

“These guys are the heroes behind the scenes too. If you have an officer answering a call, that dispatcher is their lifeline,” Brian said.

Brian estimates that the barbershop has more than 50 law enforcement personnel from Delaware County, Grant County, Henry County, Madison County, etc., who are regular customers. He said this offer is open to any member of law enforcement, regardless of where they live or work, whether or not they are a returning client.

On Friday and Saturday, Brian and Nick will also donate 100% of their tips to a donation they also host. After receiving community and customer support, the store decided to hold a raffle to raise funds to purchase gift cards for law enforcement and their families.

Law enforcement personnel who enter the store will have their names put in a hat and drawn after the gift cards are purchased, and Brian said it would be another way to show their gratitude.

The one thing Brian hopes to come out of this is that people will feel encouraged to do acts of kindness and pay for it in their own personal and professional efforts.

Brian said one of his clients is an officer from Elwood in neighboring Madison County, which has brought the recent tragedy even closer to home. It also hits close to home for Delaware County law enforcement officers.

“Our hearts go out to the Elwood Police Department and the young officer who lost his life. It is tragic and it touches us deeply, just to remind us that the first responders who do this every day do it in a way selfless,” said Deputy Chief Chris Deegan of Muncie Police.

Their department has also responded to its fair share of tough calls over the past month, including investigating the murders of three family members, a 5-year-old girl accidentally shot by her 6-year-old brother, a man shot to death outside Walmart, and the fatal stabbing of a woman over the weekend.

Deegan said their thoughts are with the victims in these cases, as well as their fellow first responders who also responded to the calls.

“We have had several major cases that have resulted in loss of life, and we take this very seriously. We dedicated every available resource we had,” Deegan said.

In all cases, including the accidental shooting death of a young child, arrests have been made. Deegan said he has witnessed the resilience of first responders across all professions over the past difficult weeks.

“It’s all been hands-on for a few weeks here and everyone’s gotten to it,” he said.

Deegan, who once had her hair cut at the barber, said the company has long been recognized for supporting first responders.

“It’s a bit like when you walk into a hair salon, you pay for the haircut. If you tip the barber, it’s kind of like saying “good job”. The police, they get paid, they’re not there for the perks, but every once in a while they need to know there’s something more than just an expectation,” Brian said.

Tribute to the victims of the Greenwood Park Mall shootings

Deegan shared, “It means a lot. You know, officers don’t do the job for the benefits, but it’s nice to be recognized and thanked, even if that’s not why they wear the uniform every day, they do it because that they want.

He hopes the next month will bring respite from the violence and tragedy faced by families and first responders responding to the call, in Delaware County and beyond. As of Monday, their department will welcome five officers who will start full-time on Monday, including a woman who was appointed Thursday evening.

Deegan also said the community has been especially supportive of her department over the past month and want to thank the many businesses and people who have dropped off food or other items.