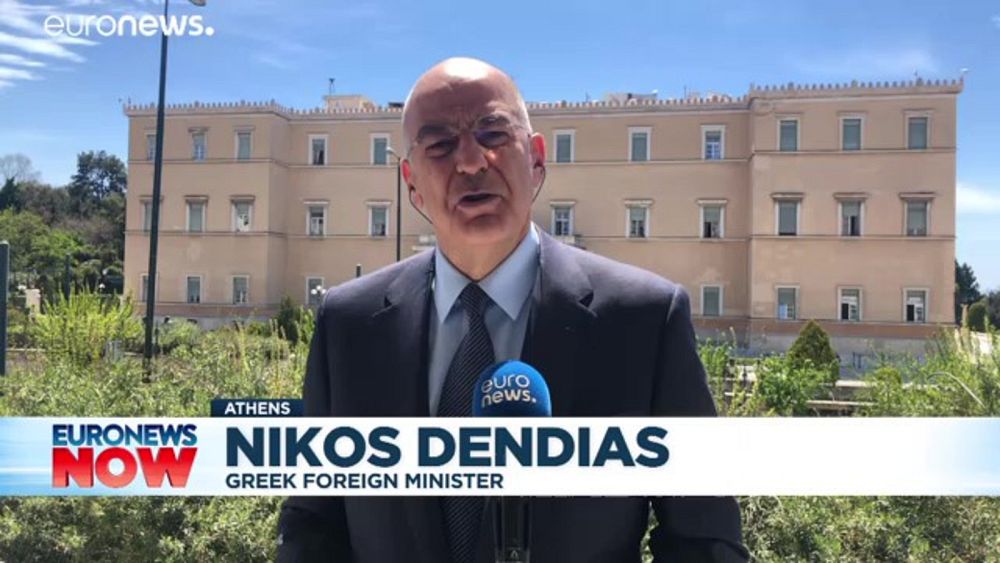 Relations between Athens and Ankara came to a boil last summer after the drilling in waters claimed by Greece and Cyprus.

While a direct confrontation was avoided, tensions have remained high since, with the EU threatening to impose sanctions on Turkey.

“We would like to take our relationship forward,” Nikos Dendias told Euronews. “But we have a problem: to solve an exercise [problem], we have to follow the same rules.

“And the rules of the international community [are] crystal clear. If we move with the same rules, we will solve this exercise [problem].

“But what is happening with Turkey is that Turkey does not accept these rules.”

Dendias was speaking a week after his meeting in Ankara with his Turkish counterpart, Mevlüt Çavuşoğlu.

The press conference that followed the meeting was a heated exchange of accusations.

The public clash caused an international sensation and exposed the deep differences between the two countries.

Dendias said Turkey violated international law in the Aegean and Mediterranean Seas, as well as the sovereign rights of Greece.

“Turkey is obliged to protect its own rights,” Çavuşoğlu replied.

Dendias, speaking on Thursday, said the meeting did not reflect a further deterioration in relations, although he admitted the combative tone was “not something I wanted to see happen”.

“This open exchange with my friend Mevlüt Çavuşoğlu was an exchange that set the record straight,” he said, adding that they both had a “very good dinner” afterwards.

“Trying to improve our relations does not mean that Greece should not repeat what constitutes long standing positions on issues of international law and international law of the sea. And also, if you allow me to say it, I’m not talking about contentious issues, it’s just black and white.

“It will be extremely useful for both companies because what Greece is looking forward to is a friendly future with Turkey, Turks, Turkish society. We are close neighbors. We can do a lot together, but it requires a very solid foundation. “

“Denial is one thing, the truth is another”

Asked about Turkish President Recep Tayyip Erdogan’s recent proposal to hold an international summit on the situation in the eastern Mediterranean, the Greek minister remained open to dialogue as long as the alleged Turkish incursions cease.

“Denial is one thing. Truth is another. What they talked about is something that cannot be considered disputed: 400 flights over Greek territory. There is no clause in any international convention or international law that allows fighter jets of one state to fly over the territory of another state, ”he said.

“Having said that, we have no problem discussing with Turkey. We would like to move our relationship forward.”

Another point of contention that continues to weigh on Athens-Ankara relations is migration. The two sides accuse each other of pushing back the migrants. Dendias refutes Turkish claims.

“I have to say that after March and February 2020, during which tens of thousands of migrants were pushed to the Greek border by Turkey in order to put pressure on the European Union, Turkey is not in a position to dictate or teach us a lesson on the protection of human rights. And I will not go further on that, “he declared.

“I think everyone remembers the photos from 2020.”

Speaking more broadly on migration, Dendias said the issue requires “the recognition by everyone that migration is a pan-European problem and that it needs pan-European answers”.

He also called for more cooperation with neighboring non-EU countries, such as Egypt, a country he said is willing “to solve the problem without asking the European Union for money and without try to put pressure or even blackmail the European Union “.